It has always been debate about heap allocation or stack allocation performance in C/C++ code (or in other programming language). We all know that stack allocation means that assembly just needs to increment stack pointer and that’s it. How ever in case of heap, there is lot more going on. The memory allocator needs to ask kernel for some free page, needs to partition the page properly, with time fragmentation may occur, etc. Thus with one word to say, lot of work. But there are very few if any benchmarks available on the web for real comparison about the results with one or another technique and how really it affects that execution speed.

Now time is come for some real benchmark for stack allocation versus heap allocation. The test scenario is following:

In test cases with out memory initialization, the memory pointer addresses are summed and printed on stderr, so that compiler would optimize the allocations because of no further usage.

The data initialization is done by doing memcpy. The typical memory block usage usually is not byte access, but some more bulky, like mem copy, integer, long, etc i.e. word size access to memory. Thus the test case with initialization uses pre-initialized memory block with random data which is copied to target buffer. After the copy every 10th byte is read.

Particular test cases was executed on Intel(R) Core(TM) i7-6600U CPU, Linux 64 bit, 4.15.0-50-generic, Spectre and Meltdown patches disabled. For your hardware setup, you might want to adjust LOOPS variable in build.sh before running, due to different machine speed. As too fast machine will give inconsistent measurements. To slow machine might give “infinite” wait time for results. 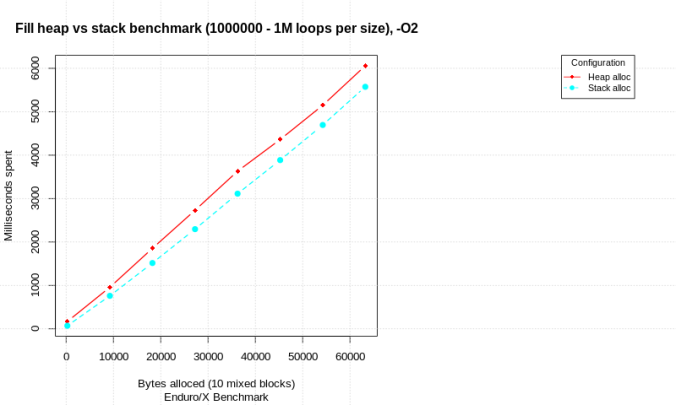 In conclusions we see that pure with out data init, stack allocation is much faster. Difference is about 4 seconds on 10M loops over 10 allocation attempts. So if checking on single pair of malloc+free, this will be about 0.4 seconds. But needs to take into account that 10 millions, is very very big number to process.

To continue we see that with -O2 filled data initialization shows much smaller gap between stack and heap allocation, due to fact that CPU is much more busy with data processing than allocation procedures. But any way on 1 million loops with 10 allocation+init+free attempts, we see that difference is about 8% at 60KB total processing size. Which also also not a big show stopper.